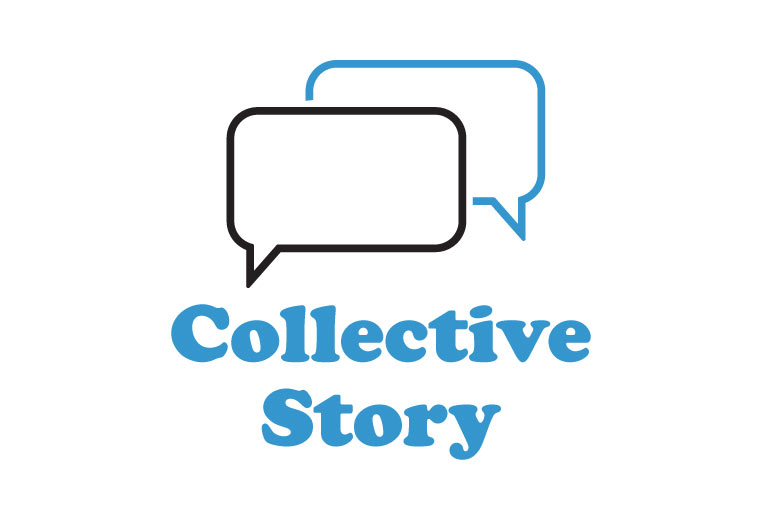 Telling stories is a time-tested, universal, and appealing form of expression that allows people to creatively engage with the world around them. Collective Story is a new project that uses the power of storytelling to start community conversations. Designed as a simple, low-fidelity intervention—an oversized piece of paper posted in a public area—Collective Story invites passersby to begin a dialogue, use their imaginations, or voice their concerns. The approach promotes civic engagement and critical thinking in a collaborative way that also happens to be a lot of fun. Collective Story was created by Anke Stohlmann in collaboration with Meghana Khandekar, Pamela Jue, and Rae Milne. Conceived as part of the team’s coursework in the MFA Interaction Design program at the School of Visual Arts, the project quickly took on a life of its own: Collective Story was featured at the annual springtime gala for Border Crossers, an organization that is working for racial justice in New York City schools.

Collective Story follows in the long tradition of posted handbills as a means of public engagement or calls to action. Some people are eager to leave their mark in public spaces—think the tagging of graffiti artists—while others have a habit of sketching, doodling, or scribbling notes in their downtime. Collective Story harnesses this creative impulse for a positive purpose and invites everyone to participate. The approach can be applied in countless situations: a community center seeking to foster a spirit of togetherness among its constituents, a school using creative storytelling as a student activity, or a non-profit organization gauging public opinion in its neighborhood. Really, any instance where waiting could be more fun or thought-provoking. The Collective Story toolkit employs three different poster stencil formats to prompt different kinds of participation, depending on the desired result. The community chat stencil uses talk “bubbles” to invite users to voice their opinions or go back and forth on a topic. The storytelling format uses a grid of storyboard squares to ask people to develop an open-ended story together. Finally, a simple frame functions as an invitation for a group drawing or community art project. (Adding a background image helps to get the ball rolling.) We piloted Collective Story with a series of quick, low-fidelity experiments that installed storytelling prompts at different locations around New York City. The exercise helped us gain insights about engaging people and understanding potential barriers to interaction. For instance, we found that people don’t engage as much with digital asks using QR codes that direct people online. Instead, they prefer more directly tangible interfaces—like simply writing on a piece of paper—and seeing other people participate made them want to take part themselves. The installations turned into mini-events that garnered a strong response through social media channels like Twitter and Instagram. People like to share and take on the conversation when they feel a personal connection. The Collective Story posters include a project hashtag and/or #CollectiveStory hashtag so they can be shared and monitored. Once the results are in, the person or group posting the project can analyze and synthesize the research and share it on the Collective Story site. The resulting artifact of the completed poster is also just as important as the process, telling its own story about how contributors participated in the discussion or drawing.

We launched the first Collective Story exhibition at Border Crossers’ annual springtime gala on May 8, 2014. The approach was especially appropriate for the organization, as Border Crossers uses some of the same techniques in their workshops for educators to explore race and racism with students. An interactive exhibit by Collective Story at the Border Crossers’ Gala, May 8th, 2014.

Installed at the Housing Works bookstore, the display asked guests how race affected them personally in a series of six different posters with themes such as “Let’s Talk Race!,” “Let’s Talk Identity!,” and “Let’s Talk Progress!” To encourage discussion about identity and race, the posters asked guests to describe themselves in five words, to think about what progress has been made toward racial justice, and to contribute their own ideas for actions to improve racial equality.